We kick of this week Phaedra “treating” her dear friend Porsha to a colonic.  I’m sorry, but when any friend of mine “treats” me to something, it doesn’t involve blasting my asshole inside out.  Phaedra, however, couldn’t be more excited to have her bunghole hosed out.  Porsha is a colonic “virgin”… which is the only sensible quality she possesses.  Phaedra wishes Kenya could be there because she desperately needs one… “she’s so full of poop she’s two shades darker”.  If I didn’t know any better, I would say that sounded a tad racist, but ya’ gotta love Counselor Parks, #ZeroPhucksGiven by Phaedra.

Phaedra and Porsha twerk in the changing room in order to start prairie doggin’ prior to the procedure.  Phaedra holds Porsha’s hand to take her mind off of the small mountain lion being birthed out of her ass.  They vent about the trash talkin’ at Duke’s sip-n-see and Phaedra dishes on her one on one with Kandi.  Meanwhile, across town…Kandi dishes to Todd about the one on one and all he wants to know is if Phaedra cut a check while she dropped by the Kandi Factory.

Cynthia greets her hunky ex-baby daddy, Leon, so they can interview a tutor for Noelle.  Noelle will be going into signing and acting and will be home schooled, but the first tutor they interview is too cute for Noelle, but just right for Cynthia’s shameless flirting.  They decide he can’t have the job because for the love of all that is good and descent, the last thing we need is Cynthia bangin’ the tutor on the wicker futon in the guest bedroom.  Anyhoo…Leon gets Cynthia alone long enough to question her about video-gate starring Papa Smurf, but he encourages Cynthia to fight for her marriage at all costs.

Porsha is running in a “Celebrity Track Meet” and we are clearly using the term “celebrity” very loosely.  Before arousing an adolescent boy in the stands, the camera man should have told Porsha that her leggings are hanging on to her ass by a thread and we can see right through them.  Kandi shows up, I am presuming for support, because there is no way Kandi is running unless there is a hearty platter of chicken fingers with honey mustard dipping sauce at the finish line.  Porsha runs her race, doesn’t do too well, and she gets smoked like a crack pipe.

After all that excitement, Porsha frets to Kandi about Duke because all her friends are encouraging her to do a preliminary pre-check on him.  Porsha compares it to Kandi and Todd, but Kandi glares at her like she swiped the last chicken finger and explains that she actually got to know Todd before she went all in on him.  Not to mention that she met Todd at work and not over Instagram.

Kenya meets with Marlo “Check My Charges” and an event planner named “Passionate”.  Kenya is launching her hair care line via the “Kenya Moore Hair Care Experience.”  We learn that Passionate planned the Cynthia Bailey eyewear extravaganza, and Kenya has faith that Passionate will make even more fabulous.  I think Kenya emphasized to Passionate about 100 times that she wants it to be freezing in the venue, which of course is foreshadowing for the sweltering heat box that is the Kenya Moore Hair Care Sweatsperience.  Marlo has a serious “fix it Jesus” talk with Kenya and advises her to squash the beef with She by Shereé.  She notes that neither one of them have any manners and that’s why they are butting heads like two motherless goats.  Okay…ahem…you know when Marlo “check my charges” Hampton is the voice of reason, your shit is f*cked up!

Kim is prepping for Kenya’s event and she and her hubby, Christopher, are excited to get out for the night and be away from the kids.  Kim is a bit nervous because she hasn’t done a “girls night out” since 8th grade.  Christopher teases her about not having any friends, but based on her wardrobe selections, that may be true.  Clearly Kim’s definition of “Getting the Look for Less” is looking like a broke down, blind, Mrs. Roper.

The Kenya Moore Hair Care Experience is underway and the guests are sweating their weaves off.  Porsha and her friend Shamea climb up three floors of rickety stairs to enter the burning inferno, only to discover that the product bottles are filled with water.  Apparently Kenya’s staff of one (Brandon – that means you!) thought this was a bottled water line!

Kandi arrives and we learn that she is actually good friends with Shamea.  Kandi asks the bartender for water, but he doesn’t have any.  Apparently Brandon used all the available water to fill the purple hairspray bottles that he picked up from Dollar General.  I bet they are out of Beer Nuts too!  Shamea doesn’t have any qualms about chugging the water as if it were real Jeri curl just to drive her shady point home.  This chick seems like she’s a fun li’l lollipop dipped in psycho.  Since there isn’t any actual drinkable water to be found, Kandi is ready to take a knee due to pregnancy exhaustion and she decides to bolt.

Phaedra shows up to support Kenya’s “square booty”, and the rest of the ensemble trickles in.  Phaedra and Cynthia are dressed like they are going on an undercover safari.  Kenya finally arrives with her date Eugene, who looks like he would smell like Pappy Van Winkle bourbon, pine, and seeing a man about a dog.  But we all know this “date” is about as real as the hair care products on the cocktail tables.  Phaedra is happy that Kenya finally met someone at her dermatologist’s office…OUCH!  The crowd may be able to find some relief from the heat under the shade Phaedra is providing.

Kim is getting to know the gang and they are excited to meet some other couples and make potential real life friends.  HA, plans foiled… Phaedra, without hesitation, launches her introduction with “my husband’s in prison” and Cynthia reveals she isn’t speaking to hers because he has been MIA for ten days.

Kenya twirls into the party and greets She by Shereé cordially, but She by Shereé isn’t sure if she can trust a bitch who “still wearin’ colored contacts in 2015.”  She by Shereé compares the event to her fashion show with no fashions, “it’s a hair care event with no hair care products.”  Kenya asks She by Shereé to step outside so they can talk without sweating like farm animals.  Kenya acknowledges that they got off to a bad start and they realize they have a lot in common.  They are both strong-willed, they both own unfinished homes, and they both sleep the same brand of air mattress.  They decide to start fresh and air-hug it out.

At the end of this three ring shit show, Cynthia finally gets some face time with Papa Smurf and she confronts him about his poor conduct at the eyewear launch party.  Peter admits he got good and hammered before he showed up.  Peter feels like they are both putting career before their marriage, and blames Cynthia for not making time for his ignorant, phantom ass.  Cynthia reminds him that she uprooted herself from NYC to move to the ATL and marry him and now it’s been non-stop challenges, empty bank accounts, and incriminating Instagram videos.  Cynthia drops the bomb and tells him she isn’t sure if she is still in love with him and they may not be compatible.  He professes his love for her, but homegirl ain’t feelin’ it.  Peter sheds some tears that cut through his thick stage makeup, but he seems genuinely upset.  Peter doesn’t feel divorce is an option, but Cynthia is on board with having an escape route.  They agree to give it one more chance, but if it doesn’t work out, it’s curtains for Papa Smurf. 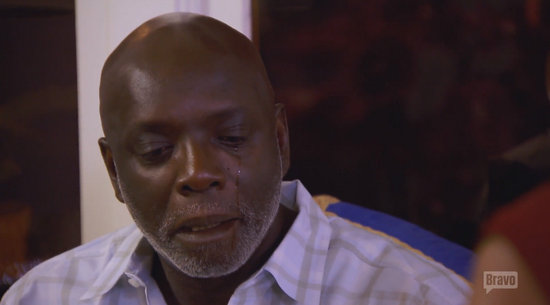 Next week, what makes Kim tick?  A boat outing goes awry, it’s Kenya vs. Sheana and Cynthia vs. Porsha.