The only time wearing leggings as pants is acceptable would be when kick fighting.  It gives the kicker a full range of motion to better overtake their opponent.  Thank goodness Cynthia had the foresight to throw on those leggings under her sundress.  She delivers a heel to Porsha’s bread basket and the deck hand and a camera man tackle Porsha down on a lounge chair as she is bucking like a rodeo horse to get loose.  Oh where is Mama Joyce with her Wal-Mart wedgie of death when you need her?!?!  The girls scatter into two groups to even out the weight distribution in the boat.  Kenya is calling SECURITY to get Porsha and Shamea off the boat and on to a dingy to transport the two thugs back to dry land. 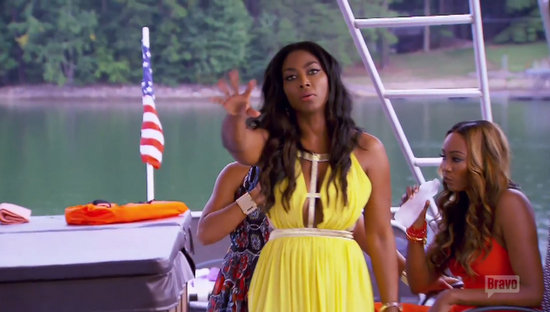 Kandi and She by Shereé are wondering where Tammy is, only to find her down in the cabin sitting in a drunken stare.  Cynthia calls Papa Smurf, and he agrees to come home to tell her she acted a fool in person.  Kim is visibly shaken by the whole scene and it reaffirms the fact that she is content with her family, her snacks, and her library book!  Hmmm… this is a buzz kill not even She by Top Knot can deal with. 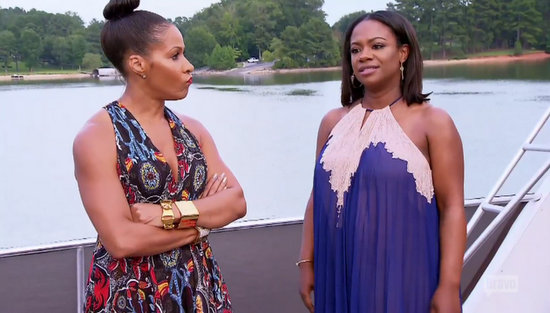 For the next 20 minutes or so, it’s the hash, hash, rehash, justify actions, backpedal, side step… Porsha is all bruised up due to her fight with the “wild ghetto cat” and there is not enough body glitter in the ATL to heal her broken spirit.  Porsha confides in her mother, who delivers a pickup truck bed full of foil-wrapped comfort foods, while WEARING FLESH COLORED LEGGINGS AS PANTS!

Kim and her “Mad Max” hair meet up with Phaedra, and Kim recounts the situation.  Phaedra claims Porsha was cut on her stomach, but Kim verifies that Cynthia had on flats she ordered from Zappos.  Kim gets line of the night “this is being analyzed like the JFK assassination!”  Welcome to RHATL, Kimmie! 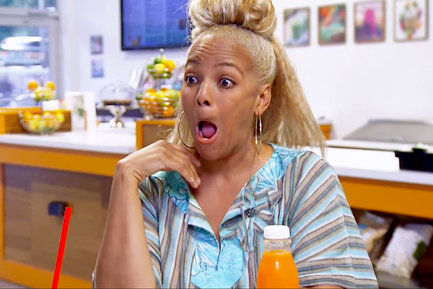 Kandi treats Don Juan and Cameron to the recap and Don Juan busts out his best impersonations, but ends up sounding more like Mama Joyce.  Kenya vents to her Aunt, who consults her “Iyanla Fix My Life Workbook” and encourages Kenya to get the girls together for another Bravo mandated meal from hell.

Papa Smurf arrives from Charlotte and Cynthia is looking for support, but isn’t getting what she expects.  Peter Thomas, unlikely voice of reason, actually points out to her that if she kicked Porsha she likely hurt her.  He also points out that his bride is likely acting out of her frazzled emotional state, and it has nothing to do with Porsha.  Cynthia freaks out a bit, and not because she was wearing leggings as pants and hideous Crocs, but because she realizes she needs to suck it up and apologize to Porsha.

Kandi needs to deal with her own stomach kicking, so she and Todd visit Dr. Jackie for a checkup.  No big news here except that when Dr. Jackie couldn’t find the heartbeat, Todd found that to be an opportune moment to step out and make a call.  WHAAAAT? 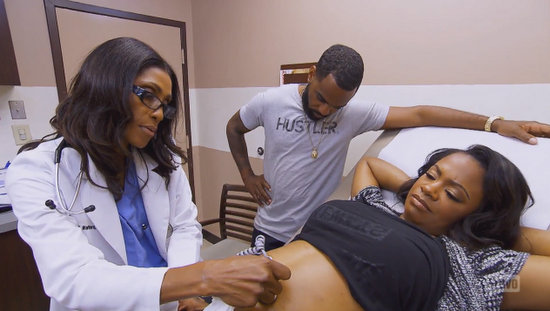 Across town, Counselor Parks has her own agenda – busting out the Snoopy Snow Cone Machine!  Ayden, who is clearly the brains of the operation, comes up with the most brilliant idea ever, which is to put cookies through the crushing machine instead of ice.  This is all I need right here, Ayden should have his own show.

Kenya calls her BFF Cynthia, a.k.a. Kung Fu Panda, to discuss her Bravo mandated Iyanla “Fix My Life” Brunch, which will give Cynthia an opportunity to get back on track with Porsha.  Kenya is actually offering some sound advice for once, she thinks Cynthia and Porsha need to talk as soon as they can and not let it fester.  On brunch from hell day, Kenya has a face to face with Porsha to prep her for the impending confrontation and I’m not sure why we even had to deal with this, other than to preview Kenya’s hideous, billowy, romper-type, flashdance-esque number that looks like she fashioned it from her grandmother’s guest bed dust ruffle.  She looks like an insane housewife from one of the square states.

Porsha takes the opportunity to point out Kenya’s bad behavior on the boat, bringing the negativity, etc.  The two deflect, backpedal, and bust out the electric slide, but then agree to move forward and Porsha agrees to play nice with Cynthia.  Not to mention her Bravo paycheck depends on it.

At the brunch location, everyone is late except for Kandi and Kim.  Kim makes it clear that she is not down with CPT and she has shit to do (that library book ain’t gonna read itself!).  Annnnd I looooovvve how Kandi plays along as if she is always on time!  Haha, that beyotch will be late for her own funeral!  Phaedra isn’t sure why she is at the “unity luncheon”, but she is not one to miss a meal and a good show.  Kenya and Porsha arrive together, fresh off their one on one.  Kim is no-nonsense with the group and lays the cards out on the table and wants to know where Cynthia and Porsha stand and why Cynthia is wearing a shirt with her own picture on it.  Porsha and Cynthia excuse themselves to go take up space in the restaurant to hash it out.  Apparently Cynthia thinks she is starring in “Sex and the City”, she is all prom dress on the bottom, Bailey Agency softball team on top.  How very Carrie Bradshaw. 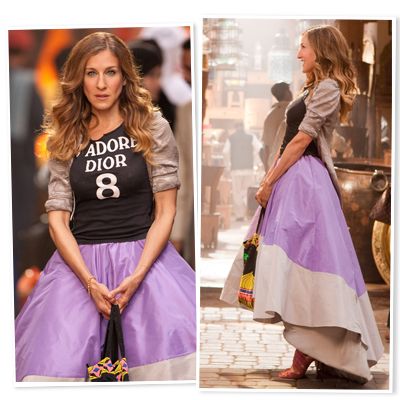 Back at the main brunch table from hell, Kandi calls Kenya out for being guilty of not recognizing her own wrongs, but Kenya let it go because it’s not good karma to fight a pregnant woman.  Meanwhile, Cynthia and Porsha apologize to each other and air-hug it out.  The rest of the gang applauds…annnnd hopefully we never have to talk about this.  Ever.  Again. 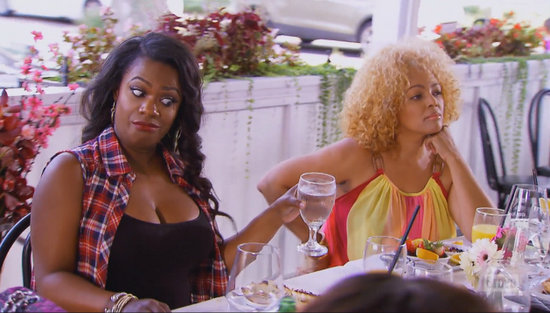 Next week, the gang is in Miami, Porsha gets her THOT on, Kim wants no part of the group.  She by Shereé accuses Tammy of sleeping with her ex-hubs, and Kenya calls SECURITY!