This week was all over the map and the only parts worth seeing was the sparkly sheen radiating from the new beard on Bob Crazy Eye and the last five minutes when we learn that Phaedra Parks is the responsible party for taking the shit stirring to a new low, not that any of us are shocked #AlternativePhactsByPhaedra!

House Hubbies – We are joined by Papa Smurf, Marvin (li’l Todd), and Bob Crazy Eye.  Bob either has a new product endorsement deal with Jheri Curl or he doesn’t understand the direction “repeat as needed”, as in, “Trim beard to socially acceptable level of crazy, apply liberally, repeat as needed.”  Bob tries to apologize to SBS again, but she ain’t buyin’ his counterfeit goods.  She has heard it all before and the door has been slammed and nailed shut on any re-kindling hopes they once had.  I don’t think she ever had any intention on getting back together with him.  I think she accidentally packed her Kandi Koated toys in a box labeled “unfinished basement” during the move to Chateau Shereé and she had a weak moment and thought she might let Bob back in the hen house.  Too little, too late Bob.  Oh, and I hope your new beard gets caught in a box fan. 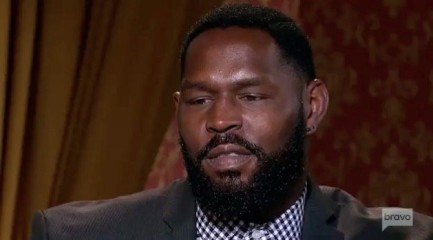 Papa Smurf and Cynthia are on texting terms and we learn that Noelle continues her relationship with Peter and asks him for advice.  Not sure what type of advice the teen would need…how to single handedly squander your partner’s life-time earnings in two years?  How to get caught on camera giving hickeys to a waitress?  How to fail at every business venture you attempt?

OHAC asks to clarify once and for all, did Papa and Cynthia take one last lap around the pool while vacationing in Hawaii?  Papa answers, if he can’t have all of Cynthia then he wants none of her or her magnificent weave.  Good answer, considering he has clearly had several cocktails.  Cynthia discusses why the marriage didn’t work, it was one hurdle after another and she couldn’t cope with the stress.  Welcome to marriage, baby, where you too can be eternally mad and resentful!  I guess Cynthia was right, she just isn’t the marrying kind.  Cynthia reveals she has gone on one date and is starting the application process, meanwhile, Peter is drunkenly swiping right on his phone and he looks up long enough to let us know that he has a very promising prospect in his snare.

In other relationships careening off the rails, Porsha and Todd are “on pause”.  He got a job in D.C., they generally are not speaking, and they have no plans on proceeding with the baby-nup.  Papa Smurf is salivating, not only for his own peach and tagline, but he is ready to pounce like a Liger on Porsha and Phaedra.  Instead he chooses to take what little dignity he has left and walk off the stage screaming to the Bravo Intern “where the f*ck is da’ drank, DAWG…the f*ck is da’ drank?!?”  Cynthia whips out her laminated wallet card containing her divorce decree, looks heavenward, and whispers “Thank you, Jezzuz!”

SBS Bone Carrier Mess Box – SBS was titled the “bone carrier” this season because she be draggin’ allllll the skeletons outta da’ closet.  Shamea joins the insufferable semi-circle of the damned and we learn that she and Porsha have terminated their friendship contract.  Kenya chimes in a few times and nicknames Porsha “Elvis” due to her sparkly outfit and new pompadour wiglette.  Porsha snarls back with her rehearsed arsenal of zingers, “you propped up those long jugs and think you doin’ somethin’!”  “Toodles Bitch!”  “BYE WIG!”  Porsha apologizes to Shamea for not defending her when Phaedra threw her and Kandi under the bus by way of obscene hand gesture, and for anything she ever did, anywhere, at any time, that made her want to terminate their friend-nup.  Shamea accepts, but goes on record stating the Frick and Frack do not have a real friendship.  It’s merely an alliance based on convenience. 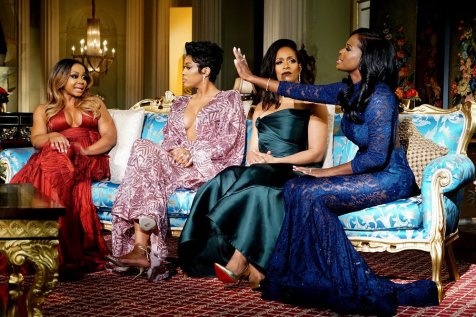 At that point, Shamea and Phaedra go at it.  Shamea says that Phaedra’s navel is a li’l to the left and she should stop using Groupon for her plastic surgery.  Across the insufferable semi-circle of the damned, Kenya chortles with delight.

Through the Psychological Threshing Machine that is the Rumor Mill – We get into the vicious rumors spread about Kandi.  Kandi admits she has taken a healthy dip in the lady pond a time or two, or three or four… OHAC is a little too interested, he wants exact numbers and a pie chart!  Pun intended.

Phaedra and Porsha keep skirting the issue on semantic technicalities, but I call audible foul.  Porsha maintains she was wearing her beer goggles when she kissed Kandi, asked her to go back to her hotel room, and then engage in an oral transaction to Kandi’s full satisfaction.  Since she and Kandi can’t agree on what actually transpired, Kandi notes that she should’ve taken Porsha up on the offer just to prove the point.  Well, sometimes ya’ gotta take one for the team Kandi!

There is more inane discussion, more demonstrations of inappropriate hand gestures, including a repeat of the index finger into the circled thumb and forefinger and OHAC throws in a scissoring gesture, just for good measure.

At this point the question is posed to Porsha as to why the hell she said those defamatory things about Kandi.  She responds by waxing philosophical about how she is “journalist” at Dish Nation.  And yes, I will “air quote” that right in her lying face!  After everyone gets off the floor from falling down laughing, Porsha announces that she received a cease and desist from Kandi and cannot speak about the alleged “Kandi planned to drug me, drag me down to her sex dungeon, and then rape me with her best-selling Kandi Koated sex toy” rumor.  Porsha deploys the ultimate conversational ripcord when she turns to her BFF and politely asks Phaedra to explain why she said this was Kandi’s intention.  And BAMM!  BLOOP!  SHUT THE PHRONT DOOR!  The Liger is outta the bag.

Next week is the explosive conclusion where Kandi loses her shit on Phaedra.  Phaedra has taken “throwing shade” way too far, it’s about to go down like a fat kid on a see-saw!  See you next week!