Rosie – she regrets telling Teresa to “take it up the ass” because she now realizes that it may become a reality.

Juicy denies ever calling Teresa a “C U Next Tuesday”, even though he did it on camera.  Teresa excuses him “he never said it to my face!”  Just.  All.  Of .  America.

The Zen retreat did Rosie some good, she quit smoking, she bonded with Juicy, and she realized that damn it, she is good enough!

Finally, at long last, the source of the Joe/Melissa rumors has been cracked.  It was Penelope Cruz.

Teresa thinks Joe and Melissa came on the show to “take her down” because four hours into filming Joe went berserk at his own son’s christening.  It really is Teresa’s world, we just get to live in it. 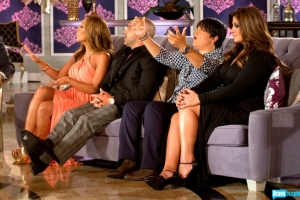 #6 – The abuse of Albert Manzo

We learn that Albert’s father was abusive in non-physical ways, Caro gives an example of how punishments would be brutal.  By not going outside on his father’s first request to shovel the driveway, Al would have to shovel snow with a tablespoon.  We also learn that Albert’s father died under mysterious circumstances.  Rumor has it his body was found dead in the trunk of his car and there is speculation of mob ties.  “I get very offended when people suggest we are part of that world, because I live with a man who has worked like an animal.  He earned a good decent living and I will go to war with anybody that’s gonna try to besmudge his name!”  DAYUM!  Caro doesn’t know what happened to Al’s father and doesn’t want to.  We also learn the body was found on her birthday and her memories are forever tainted.  If you don’t get why she won’t talk about this, than “go f*ck yourself!”

#7 – Sympathy for the Devil Goo-boo-chays

Imprisonment looks great with green glitter inevitable and of course Joe and Melissa would take care of the Goo-boo-chay girls if they were asked to.  Caro offers some practical advice based on the experiences of Albert’s buddy, Bernard Kerik.  Bernie was a former NY cop who served more than three years for tax fraud.  The Goo-boo-chays will learn who their true friends are, “they will be there when you go away and pick you up when you get out.”  Yes Tre, your ass is goin’ to the hoosegow.

As the show is winding down, Teresa has to take the opportunity to incite a riot by harping on Caroline for calling her “superficial” in one of her blogs.  Does Teresa “I won’t live in a used house” Goo-boo-chay, even know what “superficial” means?  Caro calls a time out and preps to counterblast her weave off, “30 seconds of time that you are now harping on ‘til the day I freaking die.  You have decided to take everything that I have done for you and your fambly and just sweep it under the rug and discount it!”  DAYUM…And with that, we also learn that Caroline is not returning to the RHNJ.

Well, it’s been a heckuva season, should be interesting to see how the cast is completely overhauled.  Now for a much needed break until RHATL hits the airwaves on Nov. 3!