Kathy Wakilie is hard at work in her industrial kitchen, which she scoffed about last week, however she has found a silver lining.  The test kitchen is the perfect escape from her boorish hubby, Richie.  She can fit an air mattress right under the cooling racks.  Jacs and Caro come to pay a visit and Caro drills it down “what’s the negative?” as she shovels brownie batter in her face.  Sidebar:  Does Caroline no longer own a mirror?  Brass knuckle Rosie shows up to discuss the Teresa caucus and shows off her busted hand.  Rosie describes the retreat idea for the whole gang, Jacs gives her best “aww HELL NO” and Caroline has gone as far as she is willing to go.

At the Goo-boo-chay household, everyone is strapping on their “Fabulicious” aprons to do some cookin’ of da’ books.  G to the Ia has a problem with the apron and storms off.  Jusband doesn’t understand her short temper, Teresa explains it’s “puberty” and Milania thinks that means G to the Ia is going to have a baby.  Teresa’s mother and father arrive to spend time with the family and show little Milania how the real sausage is made.  Juicy’s brother, Pete arrives with a gallon of Carlo Rossi and the gang commences to run their fingers through 800 lbs. of sausage.  Teresa calls Joe and does her patented “act like nothing is wrong” and she tells him about the retreat.  Joe is at the driving range with Richie hitting golf balls that have Teresa’s mug printed on them.

Melissa is meeting with her “friends”, Maria and Jan.  She shares the good news about her book deal and her “friends” roll their eyes.  Based on the body jewelry, it appears that these two friends may know Melissa from the pole.

Jacs and Kathy are poking around in a boutique and Kathy gets a call from Teresa.  Since it is mandated by Bravo to use speaker phone for all personal conversations to be had in public venues, Teresa is blaring away and blames Jacs for her fambly mess, not knowing Jacs is within earshot.  Jacs grabs the phone from Kathy and it’s a Jacs and Teresa showdown, with neither of them knowing how to use their indoor, irrational skank voices.

Later, Teresa is out with Kim D. and a group of hooligans, one of which is Jan, Melissa’s alleged “friend”.  Jan announces that Melissa is not her friend and she doesn’t like her anymore!  Apparently, Jan is still in third grade.  Jan spills some tea about Melissa making out with her old boyfriend behind the bleachers after school.  Teresa states she has heard the rumor before and she has confronted Melissa about it, but it’s supposedly not true.  Teresa is also stunned that Jan has turned on Melissa.  Jan, you ignorant slut…

Melissa and Kathy are taking some exotic dance workshop with their hubbies.  Richie admits he has fantasized about Melissa.  Yes, I will give you a moment to rinse the vomit out of your mouth.  Kathy gives it a half-assed go, but she isn’t into it.  Joe being a former stripper shows them all how it’s done as he crawls across the filthy floor toward his wife.

Speaking of romance, Caroline and Al are out for dinner, but Al looks like he’d rather be watching paint dry.  Caro thinks the secret to their happy marriage is that they don’t spend a lot of time together, she never has a chance to get sick of him.  They bicker about the Hoboken apartment and Al isn’t happy and feels Caro is stalking their children.  They get into a rousing conversation about how long it would be before either of them would remarry if the other dropped dead…is it me or are we tired of the Manzo’s???

Melissa and Joe welcome the crew over for brunch, everyone except the Goo-boo-choos.  The gang discusses the retreat and Rosie fills them in, “it’s in the Adirondykes”.  The famous mountain chain where all the surly lesbians roam.

Melissa meets with Jennifer the realtor, who is labeled “Teresa’s friend”.  She should be labeled “Melting cat lady doll from the screaming house of horrors”.  This is the same realtor who told Melissa her house wasn’t worth a bag of runny shit.  Jennifer gives Melissa a warning about Jan spreading cheating rumors.  Melissa is flabbergasted and seems like she doesn’t want to believe it.  Jennifer explains that Teresa didn’t say anything, but that Kim D. was instigating the whole incident. 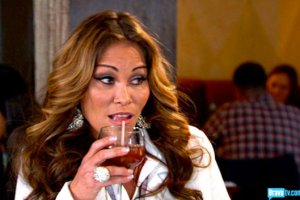 With Melissa being exhausted and bereft over the rumors, they meet up with the Laurita’s and the Wakilie’s for a drink.  Melissa tells the gang about her conversation with Jennifer the realtor and conveniently, Kim D. walks into the restaurant.  In order to keep his shit stirring biceps in shape, Richie calls Kim D. over to and he invites her to sit down.  Melissa confronts Kim D. about the conversation while Jacs keeps yammering, in the background about Teresa being crazy.  I feel bad for Chris Laurita here because Jacs is bringing nutbaggery at its finest.  The poor guy looks like he wants to slink under the table and make a break for it.  Melissa and Joe start making out to demonstrate to Kim D. that they are “unbreakable”.  Kim D. finally takes off and Melissa compares Teresa to the head of a pimple that must be popped.

Jennifer and Teresa’s helmet hair meet for lunch and Jennifer confesses that she took a page from the book of the “Million Dollar Listing New York” boys.  She admits she ratted out Jan and the cheating rumors in effort to show Melissa loyalty, garner her trust, and get her listing.  “It’s a smart business tactic!”  Is must also be a smart business tactic to reveal that you are a low down dirty skank on national television?  Jen, you ignorant slut…

Next week it looks like a knock down, slap down, shit show.  The Joe’s will finally explode in the last five minutes of the hour and we will be sucked in to the easy bake oven of hell once again.