We resume right where we left off with the meow down between Marlo and She by Shereé.  Nene manages to break up the fight and the Talls and the Smalls go their separate ways, but still plan to meet up after their respective dinner plans.  The Smalls arrive at Kevin’s house and Phaedra takes to him immediately and affectionately labels him as a “sassafras.”  The ladies are treated to a fire twirling performance which they thoroughly enjoy, but you can see the small glimpse of horror cover their faces as the sparks from the flame throwers get a bit too close to their weaves.  They are joined by several of Kevin’s friends and Kandi is seated next to a handsome man named Vince from Botswana, he’s a model, actor, in the music industry, and he’s a bartender.  Brrrzrk (sound of a needle scratching to a halt on a record).  Vince was also a big fan of Kandi’s old girl group Xcape.  Kevin tells the group about Kandi Coated Nights and opens the floor to ask any “adult” questions.  Vince is putting on the hard sell and Kandi says she is used to people “fakin’ it til they makin’ it” and she is shocked that it’s happening all the way over in Africa.  Will Kandi and Vince hook up?  Kandi Koated “hell to the NO!”

The Talls go to Nobu and Cynthia is bummed that they aren’t doing “African” things and says they may as well be in Miami.  Marlo hits the can and Nene pounces on the chance to talk the straight dope with Cynthia about the fight.  Sidebar:  Cynthia is rocking the braids in a high pony and she looks fierce.  Nene thought Marlo was just going to pull the shade down and let it back up, not pull the shade down and leave it down.  They agree that Marlo went too far when she called She by Shereé’s friend the “f-word”, considering Marlo has “quite a few gay guys in her camp”.  Nene actually has a moment of self-awareness and she realizes how ridiculous she looks when she pops off.  Marlo returns from the can and they discuss meeting up with the ladies later.  Marlo shows no remorse, says she can handle She by Shereé and that she better “google me and check my charges.”  I thought Marlo was just bat shit crazy, but I think her problem is a little further back in the skull.  Cynthia looks disapproving, Nene laughs at the comment, and announces that they shall go to the club, order some bottles, and put them on She by Shereé’s tab.”  It’s about to get buck wild.

The Talls arrive at Jade Nightclub and start pouring alcohol on themselves immediately, and thank God, because that is a sure fire way to avoid drama.  Marlo is hugging everyone and gives She by Shereé the bird.  Marlo is makin’ it rain up in here as if she has a license to print money.  Kandi is like “F*ck it, I’ll take it!”  She and Phaedra start shoving Marlo’s hooker money in their bras.  Phaedra thinks, what the heck, Ayden can get some new shoes and pampers.  The Talls and Smalls tumble out of the club around 3:30 a.m. and they have to be up at 7:00 a.m.  Nene wants the driver to stop at a qwik-e-mart so she can get potato chips and soup.  Err…it would have been better if she asked to stop at Taco Bell.  The next morning arrives quickly and the ladies are all cranky, tired, and for the first time in Housewives history, nobody is making a peep.

They arrive at the game reserve and they meet the manager, Gunther.  He gives them a brief lowdown and opens it up for questions, Cynthia asks about spa services and Phaedra fancies a gym, which is available.  Marlo asks “what about hair and makeup.”  Crickets… he says they don’t have that, but she demands that he get someone on the property to do her hair and makeup STAT!  She seriously needs to get over herself and then be bitch slapped to Siberia.  Next they scope out the rooms and immediately Marlo wants the room with the most closet space.  Kandi pulls a Phaedra and says “Everybody knows we’re going to pick numbers”.  Marlo decides she has to talk to God over it because she really doesn’t want a small room.  Score one for the Smalls, they win the drawing and the Talls are stuck in the smaller rooms.  Phaedra gets quote of the night with “Irony is so ironic!”

Cynthia is waiting impatiently for everyone at the breakfast table, the Smalls arrive after 20 minutes, but Nene and Marlo are still in “hair and makeup”.  The Smalls see Cynthia slowly migrating to their team.  The Super Divas finally make it to the table and Cynthia compliments Nene on her capelet and of course Marlo the label whore has to pipe up “Louis Vuitton, I guess if you don’t know it, you don’t know it.”  Oh snap!  Once again, Marlo’s ignorance is showing, Cynthia was a high fashion model for years, she knows Louis Vuitton when she sees it.  And another thing…Cynthia looks twice as fierce as those two hags put together.  Nene receives a flower delivery from her business partner, greezy John, but she bats her fake eyelashes and declines to discuss him. 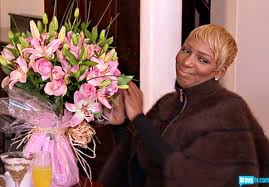 They leave to go on the safari trip and Phaedra pokes fun at Marlo’s boogaloo bedazzled pants.  The Smalls trail behind the Talls making fun of Marlo all the way.  Phaedra is actually pretty funny here and she starts doing disco moves.  Once on the safari, the Smalls marvel at the animals and enjoy the day.  Meanwhile, in the Tall torture chamber vehicle, Marlo wont STFU.  She is complaining about the roads, her hair, the animals, etc.  Nene tells her to be quiet and it’s driving Cynthia nuts.  Their tour guide gets out and brings a big turtle up to the truck to show them.  They are all grossed out.

The Smalls see some giraffes and nickname them Cynthia, Nene, and Marlo.  Kandi points out how Cynthia has been off to herself lately and Phaedra jokes that she is “losing her woman.”  Cynthia better check that Friend Contract with Nene, I am sure there is a cancellation clause.  The Smalls tour guide jumps off the truck to show them the elephant doo and discuss its medicinal properties.  They are all grossed out. 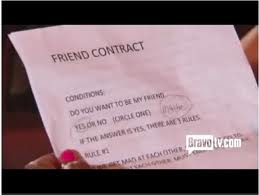 The Talls get out to look at the Zebras and Marlo scares them away.  Cynthia is embarrassed by both of them and wishes the driver would run over Marlo like a scurvy dog.  They wrap up the day with a toast and Phaedra reminds everyone they have an early day again tomorrow to go to the orphanage.

On the journey out to the villages, they see some children on their lunch break from school and they are all singing and dancing.  One of the boys does a little “pants dance” for Kandi.  The ladies go into a nearby market to buy some supplies for the school and villagers.  Phaedra and She by Shereé focus on the food items and Kandi and Cynthia buy toiletries and blankets.  Marlo, the village idiot, obsesses about buying relaxers for their hair.  Holy f*ck knuckles, she is a piece of work.

They press on to the orphanage where there are about 60 kids, most of the children there have AIDS or are from abusive situations.  The ladies have fun with the kids, drop off the donations, and then the kids sing a song for them.  Phaedra is emotional because she is so touched and the rest of the ladies actually behave and truly enjoy the experience, even that insufferable bandersnatch, Marlo.